How to Choose Morph Type

With FantaMorph, you can create "morph" movies between any two images, you can also create "warp" movies from a single source image. There are total 7 types you may choose from. 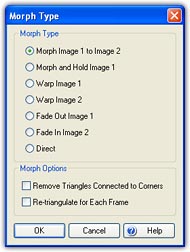 It is the most used type for creating morphs.

This is a special type only used for creating "Portion Morph". When you use a 32-bit with alpha image as Image 2, choose this type so that the Image 1 won't be faded out as opposed to that if choose the above type. As you can see in the sample below, it looks like only a portion of Image 1 is morphing to Image 2.

In most cases, when you want to create a "warp", you can use only one source image as both the Image 1 and Image 2.

However, it's also allowed to create a "warp" between any two images. As you can see in the sample below, Image 1 is warping to the shape of Image 2, but the feature of Image 2 is not presented as opposed to that if choose the type "Morph Image 1 to Image 2".

As you can see in the sample below, Image 2 is warping from the shape of Image 1, but the feature of Image 1 is not presented.

It is a simple but useful effect that Image 1 is fading out to black.

It is a simple but useful effect that Image 2 is fading in from black.

You won't see any morphing or warping effect if you choose this type. Normally, this is just that Image 1 stays there and Image 2 directly appears at the end of the morph. But if you set a Transition in Sequence Effect, you'll be able to create a nice photo slide show.